Old news, but I've just found out today, thanks to Eurogamer, about the 'never-quite-made-it' new version of Road Rash.

As seen on this video, which looks fooking ace, an incomplete Road Rash was cancelled due to the company behind it being apparently dismantled. Massive shame, as the video clearly shows the project looked potentially great, and fairly advanced. Maybe we'll still see re-emerge it at some point in the future, fingers crossed.

It got me thinking about why the Road Rash concept never took off further, at least beyond the 3DO & N64 versions.

There was a game called Jacked released on the Xbox & PS2 which looks drivel and has the shitty reviews to back that up, but surely a developer would have made more of an attempt to tap into the genre made so popular by Road Rash back in the day?

I reckon anyone aged around 30+ who owned a Mega Drive will have some of their fondest memories playing Road Rash or its sequel. Who can forget the satisfying feeling of smashing the Rude Boy off his bike, leaving him flat on his back on the start line? Or the amazing music that gave each course its unique feeling, despite them looking very similar to each other? Or the feeling of pride you get after buying your first new bike? Or, best still, that mixed feeling of guilt, regret & fantastic evilness after getting the cold shoulder post-race from the lovely (but slightly ropey looking in retrospect) Natasha when you smacked her clean off her wheels and into an oncoming car. 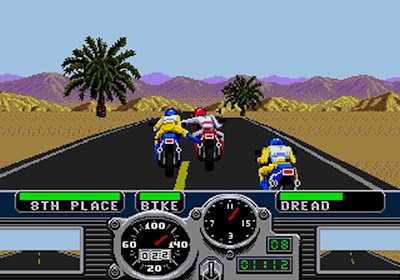 Imagine a combat bike racer in the hands of Criterion - its guaranteed to be mint. The original Road Rash & the sequel are ripe for appearances on XBLA or Playstation Network. But no, we get a whole heap of shit instead. Never mind. There is always..... erm, Jacked.
Posted by D@ve at 22:29