Don't get me wrong - reviews are great. I'm a daily reader of Eurogamer and value a 10/10 in Edge magazine as much as anyone could. I fully appreciate the opinions of experienced people in the industry and they are a huge help in guiding what games I may want to buy. 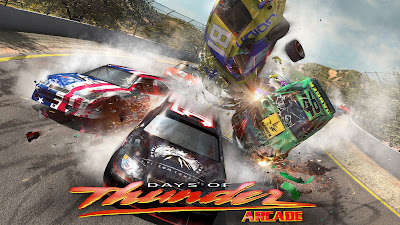 With this in mind, I was playing a trial of new XBLA racer Days of Thunder Arcade the other day. Blindly hoping it would be the budget re-incarnation of Daytona USA, or at least close resemblence, I gave it a shot and came away having had quite a bit of fun. The handling was kind of eratic, the crash mechanics were less than polished & there seemed to be a complete lack of powerslide as I've come accustomed to nowadays.

But the key bits were done well enough - it felt quick, the cars felt weighty and it was entertaining. The 'hammer' or boost function worked well, built up through 'drafting' or slipstreaming, clean laps or overtaking. I even bumped up the lap count to 20 laps of the circuit (seem to go up to an epic 60!), making the pit stops pretty essential. Rough around the edges sure, but containing a lot of the ingredients of a proper old-school arcade racer that is rarely seen nowadays.

I was intruiged as to what the world thought about the game, and quickly found out that, generally speaking, the world thinks it is, frankly, a bit shit. Problem is, a lot of these opinions are from those thick people as outlined below. One blog gave it a score of 1/5 - yet it turns out that the reviewer didn't even download the full game, so based this judgement on playing 1 track with 1 car.

Its no Daytona, but I quite liked it and am considering a full purchase. Its all opinions - thats why Microsoft make the trials free.
Posted by D@ve at 21:34