I've been spending a lot of time recently in scouring the huge but still badly organised Xbox Live Arcade back-catalogue in the hunt for those hidden gems.

Downloading trial versions has unearthed a wide variety of generosity from the developers - and it makes me wonder whether there are other people like me who are quite happy to just fill time being utterly cheap & scummy with just playing the free demos of XBLA, Indie and full price games?

I would say my gameplaying time is approx 2 hours a day max - aside from a lengthy play of Fifa I'm milling around my XBLA & full game demo collection each night playing a bit of each - a blast on TMNT Arcade here, a bit of Golden Axe there, a whirl on Scrap Metal, a race on NFS:Shift or Days of Thunder Arcade... you get the picture. I mean, you get practically half the game on the Golden Axe trial. 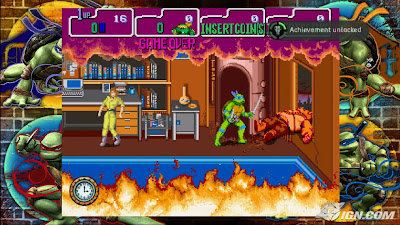 While I'm tempted to shell out a bit to download or buy the full games, I'm wondering if there really is any point? Am I really going to get significantly more enjoyment for the short time I'm playing them by getting the full game? Could I actually get by never purchasing another game again (at least for a short while) and just skimp off the generosity of developers & Microsoft?

For Indie game developers in particular, the availability of a free demo and how to judge its length & content must be a struggle. Out of curiosity I downloaded a game called Toddler Tantrum off the Indie marketplace - it is apparently designed for toddlers to play, pressing buttons on the pad to make very simple coloured smiley face shapes to appear on screen. Being a parent of a toddler myself, I tested the free trial on her, and she was actually quite taken by it. Unfortunately for the developer, the demo just never seemed to finish. Two minutes was all it was going to occupy any toddler for, so the trial did the job. Why the hell I'd download the full game... I have no idea. The fact I have took the decision to occupy my daughter with the Xbox is bad enough as it is. Next stop: putting the DVD of Hostel on next to keep her entertained...
Posted by D@ve at 22:08