On the Edge of Forgotten - 2 - Fighting Vipers 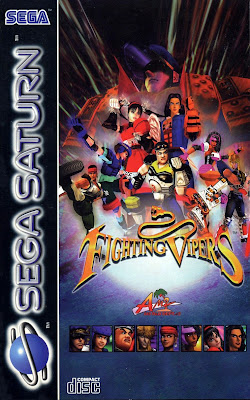 Not exactly an all time classic, but there was something rather special about Fighting Vipers on the Sega Saturn.

It was essentially a scaled down, more basic version of Virtua Fighter 2 with the differences that each character was armoured-up in some way and that the fighting arenas had walls. The characters themselves were fairly shit, but did include a rocker complete with guitar and a couple of pretty ladies... which is nice.

By smacking your opponent hard with a power move you would break off their layers of armour, making them more vunerable to damage. If that power move hits the opponent when their life is low and stood near a wall, the hit would smash the opponent through the wall in a blaze of destruction. It looked fucking ace, and was utterly humiliating for the loser.

The game was released in 1996, when I was aged 15. Needless to say, the prospect of beating up & smashing the armour off foxy character 'Candy' to leave her fighting in nothing more than her black pixelated underwear was too good to ignore. A bit pervy and wrong? Maybe, but at least it was more inventive than just flicking through the Kays catalogue in the search of material...
Posted by D@ve at 22:16