In one of my sudden game cravings, I am currently hankering to play Virtua Cop at home on the Saturn. 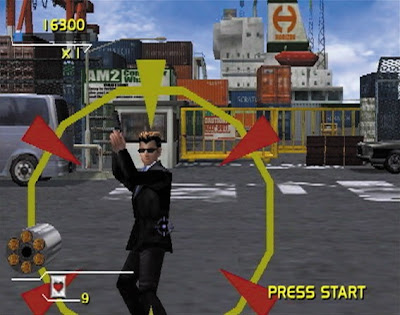 I could re-purchase a Sega Saturn and Virtua Cop with a gun in my local retro games store, GameZone (Tunstall, Stoke on Trent - have a look in if you're passing!) for a few quid, but there is obviously one massive problem that I've completely forgotten about - lightguns simply do not work on HD televisions.

I'm struggling to think of any other entire genre of videogame that has become extinct in its known state since the introduction of technology. For me at least, the times of pointing a bright blue or pink gun at the screen while being guided around a port full of Reservoir Dogs wannabes are gone. I suppose I could drag out the old chunky CRT television, now relegated to upstairs, for a play but I really can't be arsed for one game. I might have liked to play Operation Wolf too...

While not everyone has a HDTV, its only a matter of time before people will find it impossible to play Virtua Cop on the Saturn. Sad days indeed. I'm aware that the Wii has a fair few gun games available for it, using the new technology, but we all know its not the same without the proper guns. Fuck!

So, goodbye Virtua Cop - you made my arms ache but were a hell of a lot of fun to play - maybe I'll see you again in some form on XBLA when developers making games for Kinect realise what is possible??
Posted by D@ve at 21:26