For years now I've had a bit of a thing for top-down racers played out on one screen. There is something fascinating & incredibly satisfying about playing this dying breed of racing game where all the action is entirely visible.

Maybe it's the way you can see how close the race leader or the chasing pack are at all times that makes it so appealing. Maybe it's the entirely visible and often intricate tracks all crammed in the screen. Or maybe it's just the way you can play them without worrying about ruining an entire race by misjudging the fucking racing line on a corner.

Whatever gives these games their special appeal, I don't half wish there were more around nowadays. Although a lot of these games started off in the arcades with their cool-looking set of colour-coded steering wheels for multiplayer, my youth involvement with the games was spent playing Super Off Road on the Spectrum, then later on thre Mega Drive. Upgrading my vehicle inbetween races, taking multiple routes through some courses, coming back from the dead and pipping the competition on the line in a photo finish....it was great up to the point where it was impossible to keep up with the shitty little AI trucks even using nitros every other second.

As things evolved, games such as Micro Machines, Skidmarks & Rock 'n' Roll Racing took things further with scrolling tracks & isometric viewpoints. This was fine but with it the magic of things being on one screen was lost.

Even these are few and far between now, but it's good to see there are a few remaining shining lights out there on current generation consoles & handhelds in the form of Xbox Live Indie Community game Mini Racers, Wii-Ware's Driift & the i-Pad's Reckless Racing, which looks fucking ace. Makes me wonder whether the big widescreen TVs that are commonplace in the houses of gamers nowadays got more potential to revive the genre with brand extentions such as GRID, Need for Speed, Forza, Gran Turismo or (dare I say it) Daytona USA? 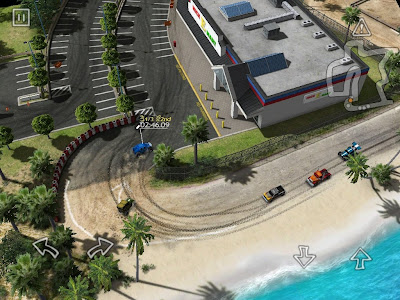