Bang Bang, She Shot Me Down

Such a long time since I posted on here... all the way back in January.  But behold, a reason to write once more - the launch of Bang Bang Racing on XBLA has got me interested again!

You'll see from a couple of posts down that I was quite looking forward to this game's arrival.  I'm a huge fan of top-down racers - some of my fondest memories are from playing the likes of Super Off Road & Super Sprint on the Spectrum or Micro Machines (plus sequels!) & Super Skidmarks on the Megadrive.  I also loved playing a lesser known game called Indy Heat on the Amiga that my cousin owned, which fascinated me with its wonderful tracks, settings, colour and staggering detail.  It is this detail that is behind the reasons I have also quickly fallen in love with Bang Bang Racing.  Check out the intricate detail on this track below from Indy Heat and compare to the one from BBR - I'm convinced the developers of BBR were inspired by Indy Heat - look at the pit lanes, the bridges & buildings, the crowd stands - even an ambulance on stand-by on both!

The game looks superb, with its crisp, smooth action and pastel shades reminiscent of Sega's blue skies of Outrun & Sonic.  Little touches look great, such as tyre marks are left on the track when skidding, the way the cars burst into flames after taking too much damage, even setting alight an oil slick if driven over while ablaze.

This is all very well, but it also delivers with the different driving mechanics of the 4 classes of cars available in the game - forging a path between arcade simplicity and genuine skill, much in the same way as the greats like Super Mario Kart & F-Zero do so well.

The game starts you off with the N-Dura class of muscle cars - solid and safe to handle but without a lot of thrills and virtually impossible to powerslide round corners. The game's well designed tracks and race formats (standard race, time trials & eliminators) are slowly introduced and unlocked (including the Daytona & Indy 500-inspired Layton Raceway oval!) and you begin to start learning the track layouts.  Learning the tracks is vitally important in Bang Bang Racing, not least because while the "Fixed" camera viewpoint of the racing is generally OK, visibility of the track in front of you can be poor at times, most often when racing 'down' the screen at speed.  Knowledge of where the corners are and the best route through them helps a lot.  There is an option to choose the "Follow" cam, which places the viewpoint above and behind the car at all times, but for me it brought its own trouble of making me feel ill and disorientated and, frankly, takes away some of the magic of it being a top-down racer.

Quite how the track visibility reduces even further in multiplayer affects things I don't know, but credit to the developers for remembering that some people do occasionally still want to gather round the telly to play together on local multiplayer. (Why has this disappeared from the world????!!)  I've always felt that online multiplayer isn't the be-all-and-end-all, although in fairness it would have been a good addition so does unfortunately feel missed by its absence. 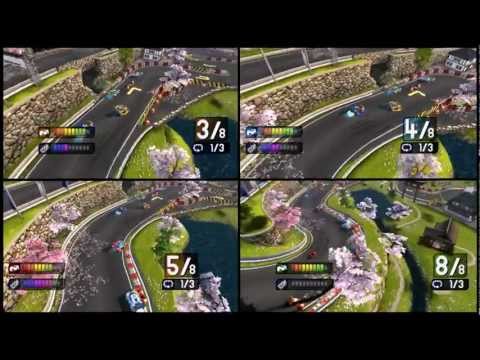 However, the fun really starts with the introduction of the Evo & Protech classes of car, which take the speed of the action up significant notches but also open up Bang Bang Racing to be a game not just to play in patches, but to master.  These cars can be flung around corners at speed and powersliding becomes a real joy.  Taking a Monaco-style hairpin bend at full speed to take the lead on the final lap can be hugely satisfying - and all of a sudden this twee-little arcade racer becomes something you want to really play around with.  Its depth of handling for a top down racer is impressive and brings a smile.  Shaving fractions off your best lap times becomes important, finishing first on all tracks and races (then repeating it on Hard difficulty) becomes an obsession.  Even the slightly suspect (but true to retro!) rubber banding of the AI racers is easily overlooked as you strive to perfect each corner to ensure a win.  Leading a race only to misjudge the final corner and see victory snatched away is INFURIATING yet really dramatic, and because the races are fairly snappy affairs with lap times ranging from 10 seconds to half a minute it certainly never feels like a chore to repeat the races.

The final class of car, Apex, which are essentially F1 style, flings the game into another dimension, with speed cranked up to overdrive but handling reverting to precision.  Nitro timing is key, powersliding is far less important nor possible and corners need to be taken accurately.  Races become a pants-wetting, edge-of-your-seat, blast of panic as you fling the little rocket of a car round the tracks with little or no room for error.  Track knowledge, already built up, is paramount - and by the time the big Layton Raceway finale comes around to win the championship you feel like an exhausted yet refined driver of these little toy-esque cars.

I think that this is the biggest compliment to Bang Bang Racing - while very much an arcade game, the way the game is paced through the Career mode and the way each car class requires different driving skill to succeed in my opinion lifts BBR from just another top down racer to sit proudly as a modern classic in its genre.  We've been starved of a decent top-down racer for decades - for that reason I'm going to declare it a massive success and I urge anyone reading this to at least give the demo trial a shot and relive the joys of retro arcade racing!!