I love the film Groundhog Day.

The whole concept of being able to repeat a day, or a moment in time over and over again, learning and tweaking your actions and behaviour to get better and better, or wiser and wiser each time, is something that fascinates me.

I think the way that Phil Connors (Bill Murray) uses the time he has to meticulously tailor the situation to get to the end result he wants is absorbing and hugely satisfying to watch.  The way he knows what is going to happen though experience and learning is comical and expertly done by the directors.

But equally, I find the way that he also uses the time to do the bizarre things, the ridiculous things, the dangerous things, morbid things and the positively evil things is where the magic of Groundhog Day shows itself - summing up what the human mind can do when there are no real consequences.   Bill Murray isn't my favourite actor, but in this film he is perfection.

I watched another film, Source Code, this week.  Although not a comedy, it has a lot in common with Groundhog Day with the theme of exploiting time shifts, and again I really loved it.

And although Source Code shows the character going 'off topic' (or off mission in this case) and using the opportunity to do something different, the crux of the film is about learning from mistakes & rashness, taking more advantage of time, building progress bit-by-bit to finally change the outcome of the future for the better.

And, as a bonus, Michelle Monaghan in Source Code is significantly fitter than Andie MacDowell ! 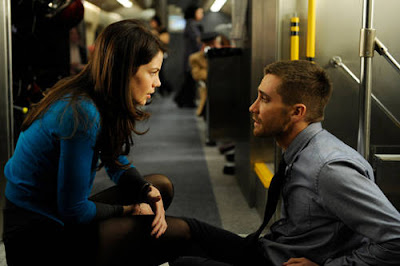 Shortly after watching Source Code, it then struck me - these films are just like videogames.

Whether a platformer like Mario, ESWAT or Super Meat Boy, a scrolling fighter like Double Dragon or Streets of Rage, a shooter like R-Type or Afterburner Climax, driving games like Stuntman or maybe an action/adventure game like Dark Souls or Call of Duty, a whole host of games are based on patterns of play, on learning based progression - getting better and better through knowing what is going to happen - before it happens.  I remember playing Virtua Cop so much that I knew exactly where each of the enemies was going to come from - but it made thing no less fun.

But this is combined with the similarities to open world adventures like Shenmue, GTA4 or Fallout 3 where the joys of experimenting interfere playfully with your main focus.  Is it really the best use of time to play on an Outrun arcade machine for hours when you should be hunting down the killer or your father???  No, but when there isn't really an consequence, who cares!