Completely random post, but as I said I would occasionally talk about football in this blog, here goes my first post - dedicated to the return to UK football of Paolo Di Canio, formerly of the mighty Sheffield Wednesday, and one of my all time favourite footballers. 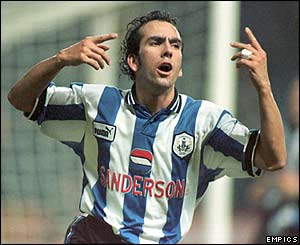 Paolo was well known for his time at West Ham, with his superb spell alongside another Italian, Benito Carbone, with Wednesday being often forgotten or overlooked, or at the very best simply associated with his infamous push on referee Paul Alcock back in the late 90's. Of course, it must have been funny as fook for everyone else at the time, but I knew in an instant it would spell the end of his time with us. We've been pretty shit ever since really.

He was a real shining light in a team of hard working but ultimately dull Englsih players. Some of the goals he scored for Wednesday were out of this world. He was probably one of the first players to wear white and even orange boots, too.

He's now back in the UK as manager of Leauge 2 side Swindon Town. Stranger things have happened I guess, but I genuinely hope he is a huge success and gets a move to a big club after a while.... maybe at Sheffield Wednesday???
Posted by D@ve at 22:20