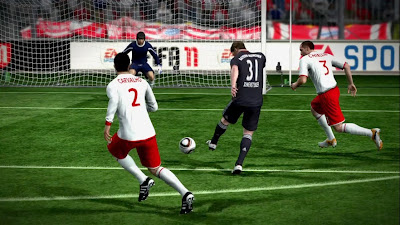 On playing yet another frustratingly dull game on Fifa 11, struggling to score and finding myself going through the same routines, I questioned why I was bothering playing it at all, and turned off the Xbox.

As a dad of two and my Xbox now set up in the lounge (gone is the unsociable games room...) time on the old videogames is pretty short and precious, so sitting through yet another chore of a match isn't the best use of my time.

It was never like this in Fifa 10 was it? Scored goals for fun on that one, albeit fairly similar ones, but the boredom factor never kicked in. If it wasn't for the lure of curiousity and cheap supermarket retail prices of the latest update I'd still be playing Fifa 10. Obviously I could always go back to playing the old game, but there has to be a way of making Fifa 11 more... interesting.

Then it hits - the acceptance that, to be honest, I'm fairly shit at it. I'm playing on Professional level. I could just try Semi-Pro. That wouldn't be too bad would it?

One problem - I've grown up to believe that playing on Easy settings is cheating. Its a setting that is for wimps who just want to complete the game as quick as possible, just for the sake of saying they've completed it. Its for people who use walkthroughs rather then slugging it out and getting the satisfaction for a good job. Fuck it - I even put myself through hours upon hours of joypad-smashing frustration to the point I wanted to curl up and cry when fighting Alma, the pink boss, on Ninja Gaiden. But I did it eventually and it felt great. It's just wrong to put games on Easy... 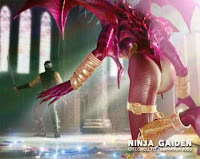 But needs must - I'm nearly 30 and aren't trying to impress anyone here. Besides, I've done it before, having learnt how to play Virtua Racing, Daytona USA & Sega Rally using manual gears before realising its an utter ball-ache and reverting to automatic ever since the days of MSR on the Dreamcast.

Time to swallow my pride and play Fifa 11 on Semi-Pro. And fuck me - its amazing. Goals come easier & the fun comes flooding back. Its like playing Pro Evo 4 or Sensible Soccer in the old days. Headers crash in, I score more long range shots and life is good again.

Suddenly I'm going to piss this league and I don't give a shit that its on an easier setting. Balls to it, I'm enjoying it for once. Nothing wrong with that, is there?
Posted by D@ve at 22:29