The great thing about the videogame indistry is that is all about opinions, but regardless of that I can usually understand why some people like a particular game, even if I don't myself.

But what really gets on my tits is 'game snobbery'.  That is an entirely made-up phrase but speaks for itself.  And with the launch of Earth Defence Force: Insect Armageddon on the Xbox 360 this week, game snobbery is well and truly back on the map for certain reviewers.

I must first point out that, in fairness, this release has received generally strong review scores from the world's media.  I have yet to read any review as short-sighted as the ones that gave the prequel, EDF 2017, a 3/10 simply because of a dodgy physics engine.

With EDF 2017 being very much a cult hit, a lot of the hardcore followers were merely begging with fingers crossed that the new developers wouldn't mess up what made the original so good.  But importantly, the reasons why the original was so good were actually very much linked with its limitations.

Not make sense?  Let me explain.... one of the best aspects of the original was the complete mayhem and destruction possible.  Lets make no mistake, it is mayhem & destruction beyond any other game out there.  But of course with that comes some kind of sacrifice - in this case less than ground-breaking visuals, at least on a technical level.  If mayhem and destruction is what the essence of the game is all about, why should this sacrifice matter one bit??

Its a bit like saying the fastest Formula 1 car doesn't have a nice roof to keep the rain out, or enough room in the boot for your weekly shopping.  Of course it would be lovely having all these things too, but if it makes it perform worse then isn't it missing the point?

And it is just this that certain reviewers have already started to forget for the new release.  "Insect Armageddon’s third-person killing spree doesn’t offer much in the way of cutting-edge graphics or varied mission structure, but its single-minded arcade simplicity is also its greatest strength." (Official Xbox Magazine, US, marked 6.5/10)   Does this game NEED to have cutting edge graphics?  And what does the phrase 'graphics' encompass anyway?  Does loads of enemies on screen & huge scale not count?  Look at this screenshot - is it really just me that thinks this looks beautiful? 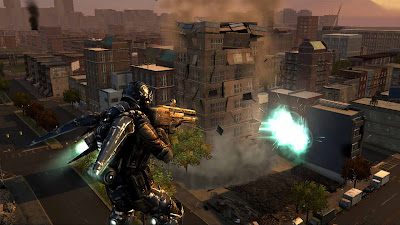 At least I'm not the only one with this opinion... I stumbled upon this comment on a forum that seems to have been bang on with my thoughts....


Yes, the plot is pretty non-existent, and it lacks big beefy sidekicks who embody some ethnic stereotype but still break down and cry when their deep deep personal tragedies overwhelm their deep deep beefy manliness. And those are both plusses, but it's still getting dinged for subtracting unnecessary things. It's exactly what you want from a $40 game. Perhaps this artful minimalism would have been more palatable as a download game?"


It maybe is a bit harsh to talk about the game like this right now - I haven't even played it yet.  And in fairness many of the early reviews do acknowledge how fun it is despite of AND because of its own limitations, but even then they will seem to be forced into awarding it a 'safe' 7/10 score.  Be brave people!  Stick your god damn neck out like Eurogamer did last time out (9/10) - drop all snobbery and admit that you like the game and find it infinately more fun than Call of FOOKING Duty 4 or one of its identical brothers and give it a truthful score.